MHATRE LAB
I'll be talking about my work at noon on June 17th, 2020 here. The talk will be archived and available to view for a bit even after the day.

Actively amplified hearing
Hearing can be really odd. Some ears don't just percieve, but also produce sound. A truly remarkable biophysical system harnesses the motion of molecular motors to make hearing more sensitive and more selective. And also increases its dynamic range.  The same basic auditory biophysics seems to appear in a fairly broad phylogenetic range, extending from insects all the way to mammals, despite the very different architecture of their auditory sensory cells.

The process is called active amplification and while the mechanical behaviour is the same across a broad phylogenetic range, the cell structures and molecules involved are quite different. I discovered this process in the beautiful insects you see on the left tree crickets.
Current biology,2013

Sensory ecology of active hearing
In the shorter term, I want to study what this process is really for. The function of active hearing has largely been presumed rather than studied. In tree crickets,  I showed that it is used to create tuning, in the peripheral auditory system, tuning to conspecific song where none exists through simple mechanical resonance. I've also shown that they use this labile physiology based tuning to track temperature induced changes in song frequency. We tested this using both mechnical and neural measurements, a first in these very delicate insects.
I'm interested in how this sensory system has evolved to be adaptive for the specific ecology of this animal. Whether it's primary function is simply creating auditory tuning, or modulating the auditory system to suit the animal's changing environment or sexual selection needs. We're studying a few different things and more papers are on the way.
Biology Letters,2016

Mechanism & evolution of active hearing
In the long term, I'm interested in figuring out the exact molecular mechanism of active amplification in insects and also in figuring out its early evolutionary history. How can you build a motor system that does the same thing despite changing parts? Specifically, I'm interested in how this process may emerge out of the collective behaviour of coupled motor molecules.

Structure & function in animal communication
Insect auditory systems
Insect ears and vibration detectors have a wide variety of structures and in general these structures are adaptive. They enable signal analysis long before the sound has been transformed into a neural signal. As such they are robust, miniature signal analysis systems and I hope to understand how their structure contributes to generating their function.
We have shown that in locusts for instance that the thick-thin structure of the locust ear acts to funnel waves of different frequencies to different positions, creating a mini frequency analyser.
Interface, 2014

Insect sound production mechanisms
Insects communicate using sounds at a pitch that they are too small to efficiently produce. I'm interested in the mechanisms they use to ensure that they can be as loud as possible and to create different frequencies. Different mechanisms that I have studied are either structural, like wing size, or behavioural, like baffle-making behaviour.
I have already shown that in tree crickets, the wing that is used to produce song is elongated and so is the resonating part of this wing. This is likely to have been an adaptation for being louder. But it also forced a compromise on the insects, their song frequency could no longer be tightly controlled and varied with temperature. Of course, fortunately their actively amplified ears then keep up with this change by also having temperature dependent tuning. We don't know which came first though !
I also have a paper in review about the behavioural mechanism that these insects use to be louder.
PNAS, 2012
Spider vibratory communication
Quite like sound is to crickets, mechanical vibration is a large part of a spiders sensorium. Spiders use vibrations for mating rituals, to detect prey and also to, well, sense their own locomotory motion.  These signals vary over several orders of magnitude amplitude but very little over frequency. They use the same set of sensors, lyriform organs, which look like cracks in their cuticle to sense all of these signals. The organs are also located all over the body of the spiders. How are the different signals represented and decoded in this array of sensors? I'm currently using a combination of multi-laser vibrometry and multibody dynamics to try and solve this problem. 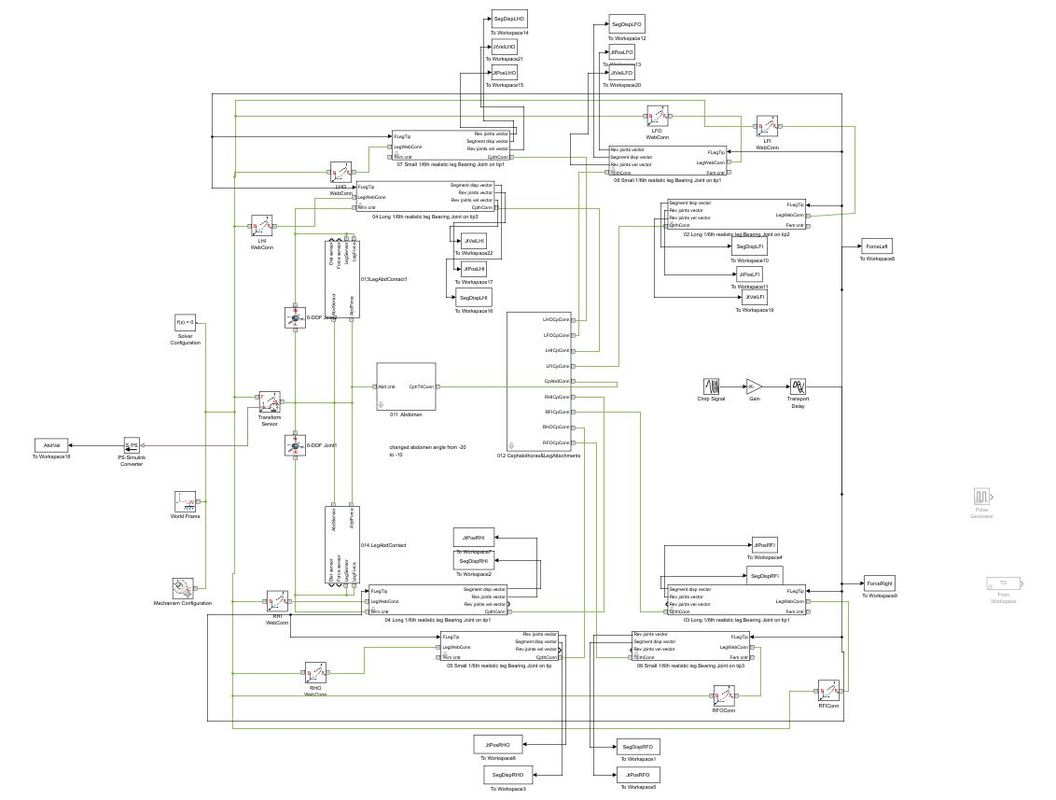 The monster code that 'builds' the spider shown above. Can you see the structural echoes in the two?